The stadium for McDaniel College has been in existence almost since the inception of the College in late 1800’s. Set in a unique bowl-shaped setting, the venue became famous for its “drive-up” tailgate viewing experience, allowing supporters of the College Green Terror sports teams to back up their vehicles to the edge of the bowl for a special perspective on home games. The College has won numerous accolades for it’s visitor experience, including the “Top 25 College’s to Tailgate” list from Southern Living. The original Baltimore Colts, and then the Baltimore Ravens football teams used the campus fitness facilities and stadium for decades. It was time for the College to expand and update the Stadium.

The new Kenneth R. Gill stadium facility features a new grandstand and team building as its centerpiece. Seating 1434 in both first class seats and bleachers in the grandstand, the building also offers a full press and coaches box, featuring the Sydney Albrittain Hospitality Suite, team rooms, satellite training facility, area and restrooms and concession for both grandstand patrons and tailgaters alike. Site upgrades include courtyards, pathways, a plaza for game day activities, and landscaping. Due to existing soil conditions, the building was constructed on an extensive Geopier Rammed Aggregate Pier (RAP) foundation system to avoid settlement issues with this substantial structure.

Materials and detailing were designed to fit with the existing campus aesthetic, with a brick and stone detailed exterior and iron gates. A dramatic roof canopy provides a focal point, and affords some protection for game day film crews.The central section of seats are colored to form a large “M” logo in school colors green and yellow.

The athletic department describes their recent projects as “transforming the stadium, bowl and field into one of the finest athletic facilities not only in the Centennial Conference, but in all of Division III.” 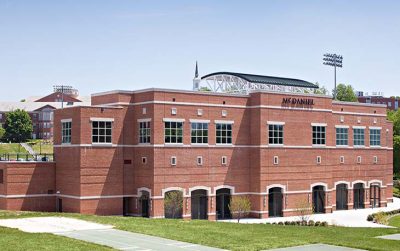