Marshall Craft Associates was tasked with doing the right thing well when asked to conduct a feasibility study on Towson University’s Auburn House. The goal was to celebrate the original architecture while proposing to upgrade systems to meet the standards of Towson University and the 21st century. It was suggested that the three-story home will feature an elevator to increase accessibility. MCA was also tasked with developing existing facility documents. All of this was meant to honor the history of the architecture as this project is listed on the National Registry of Historic Places.

Built in 1771, the Auburn House was originally planned by Capt. Charles Ridgley. The name was derived from the 1770 poem The Deserted Village by Oliver Goldsmith. The stone and stucco construction is one of the few examples of Italianate-Federal architecture in Maryland. This can be observed through materiality and the remaining examples of Victorian-era ornamentation. This was all given as a gift to Ridgley’s wife, Rebecca Dorsey. Dorsey continued to live in the Auburn House until her death in 1812.

The property was later traded among many families. Smaller renovations would then occur. Gardens were developed to integrate the landscape with the architecture as the built environment of the United States was reconnecting with its fascination for outdoor spaces. Service areas were later added to increase the practicality of this property being used for hosting larger gatherings.

In the fall of 1849, Severe Storms rocked the East Coast. A major fire engulfed the Auburn House leaving only the foundation. The property was immediately rebuilt to its original grandeur. By 1944, the house was sold to Sheppard Pratt Hospital (now recognized as Sheppard Pratt Health System). The medical director of the time, Harry Murdock, moved himself and his family into the property.

Towson University purchased the home in 1971 and reopened its doors by 1976. The space is now used as a gathering space to host events for alumni and to hold opportunities for fundraising. 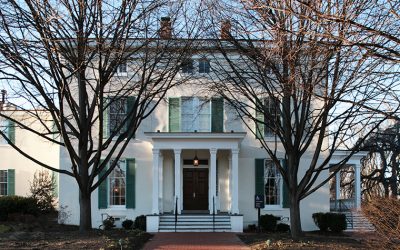 Maryland School for the Blind