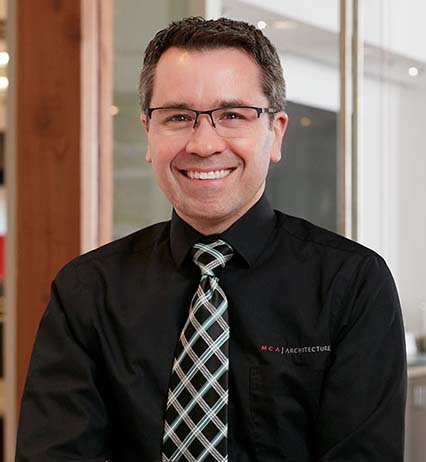 Andrew has a diverse background, assisting clients of all sizes and types in accomplishing their facilities goals. As a Graduate in Architecture from Auburn University and a Graduate of Southern Baptist Seminary with a concentration in Leadership and Church Growth, Andrew has the ability to work with institutions to not only evaluate facilities but to help evaluate programs to maximize the use of facilities.

Andrew has had long-term relationships with multiple higher education and religious clients, resulting in more cohesive and effective campus environments. Although extremely diverse, his primary client experience focuses on education and assembly facilities, including higher education, sports venues, churches, and K-12. Andrew is technically minded and appreciates the art of architecture. This combination has resulted in his bridging the gaps between function and form, codes and aesthetics, and information and experience. One specific way this perspective appears is through implementing improvements to the graphics and documentation standards for every company where he has worked.

Since joining MCA in 2016, Andrew has led a team to update and refine documentation standards with a goal of clearer, higher quality, and visually pleasing documentation. He is a registered Architect in Maryland and Alabama, NCARB Certified, a member of the Baltimore Chapter of the AIA, and is an Ordained Minister through the Southern Baptist Convention. Andrew serves as an Executive Board Member with the Greater Towson Committee and is actively engaged in multiple developments and community groups in the Towson area.

Did you know that …

Andrew has been directly involved in starting new churches in at three states and two countries, and has been indirectly involved in many more around the world. Andrew is also an accomplished musician, playing percussion and piano. In high school, he led the sideline percussion section and spent the summer prior to his senior year arranging all the parts for his section. He has also been known to arrange music for various church ensembles and praise teams throughout his life. Despite his small stature, Andrew has a distinct baritone voice and is annoyed that most current music is only for high tenors, unlike the days of Bing Crosby, Frank Sinatra, or Johnny Cash.